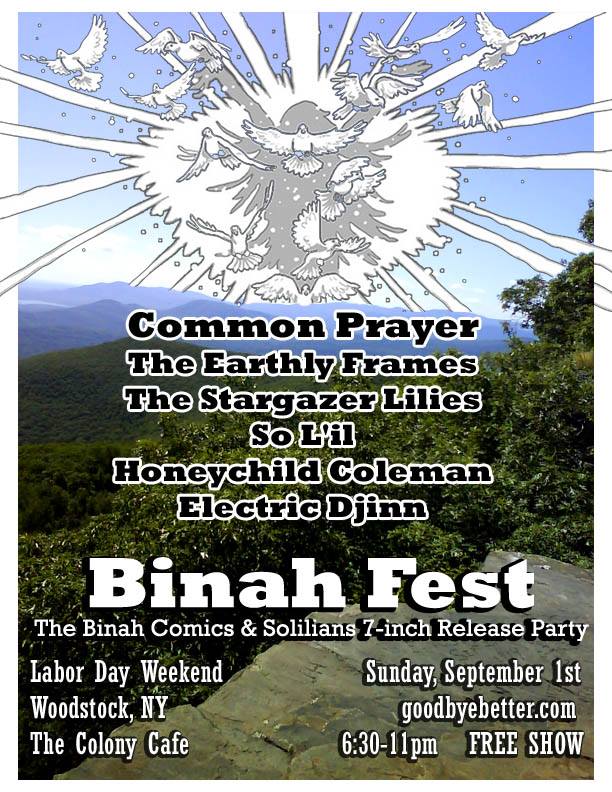 Date
This show occured in the past: 09/01/13
Location
The Colony Cafe, Woodstock, NY
Description

The comic book ‘Binah’ is a collaboration between the illustrator Ian Densford and the writer Ben Malkin. Ben wrote the script about a teleporter named Binah, who, along with her team of powers (Metamorphosis, The Daughter of Illusions, & Flush),  stages five ‘signs from G-d.’ The signs are meant to try & secretly convince her people, the Solilians, that they need to move their home & holy land, Strong Island, or suffer inevitable atomic annihilation. Amidst a sea of escalating tension, hatred and violence from their neighboring countries (~particularly Old Jersey, whose people the Ifwhen, are very close to atomic capability), the Solilians find themselves eternally on the defensive, and constantly having to anticipate when the next attack or tragedy will be. Binah, who does not love her own government, but rather simply wants peace, believes she was visited by G-d in a dream, informed she is the Messiah, and that it’s her duty to get the Solilians to emigrate to a far-away island she’s bought before it’s to late. The ‘signs from G-d’ do get people talking, and the drunk noir detective Blaze Braff (who himself has super-speed) is sent in by Strong Island’s government to get to the bottom of it. Quite a bit ensues but we’ll save that for the comic. Suffice to say, in light of recent events, this tale is more relevant than ever.